Run Towards the Plane! 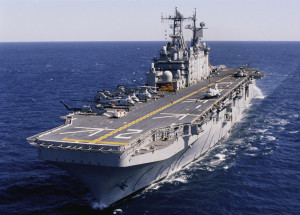 A client shared the following story with me. While he was serving in the military on an aircraft carrier, his job was to help guide the jets onto the runway during landing by standing in front of the aircraft. Obviously, as the aircraft would be coming into landing, the jet would have to latch onto the cable which would then catch the plane and slow it down rapidly so that it could stop. As the jet is flying through the air, it can at times accumulate debris onto its surface. When the plane stops suddenly, that debris doesn’t stop and can continue to be propelled forward. My client was taught that whenever there was debris or, if in the unlikely event of a plane crash that would propel jet parts forward, the client was to face the debris and run into it.

Our natural instinct would be the exact opposite. An individual standing and seeing an object being propelled at such a rapid rate would most likely turn around and run the other way as fast as they could. However, through extensive training, the soldiers were taught to do the unnatural. They were told to face the debris and run into it. The reasoning was that then they could more clearly see what was coming at them and they could more easily get out of the way of an object than they could if their back was turned away from it.

What struck me was this, often times when I’m working with people who are struggling with addictions or other unhealthy coping strategies, what I find is that they have a very low tolerance to pain. The pain scares them and makes them feel uncomfortable. And in most cases, instead of handling the pain, they turn and run away from it. It’s when they turn and run away from it, that the pain comes up behind them and stabs them in the back causing their lives to become increasingly unmanageable and difficult.

A recent study conducted by Dr. Brené Brown at the University of Houston Graduate College of Social Work showed that the happiest of all people were the ones who were willing to lean into the pain. For example, the woman who is willing to wait patiently for the results of her breast biopsy without finding a way to distract herself or the man who found out that his girlfriend is leaving him and is willing to sit with the pain and allow himself to be sad without finding a way to numb his pain – in both of these scenarios, we find that the people end up being happier and more at peace at the end.

The example of facing a giant fiery jet zooming right at you and not turning away is a fantastic analogy for what we are required to do in our lives. When we stand and face our fears rather than run we will also find out that we are stronger and can be more at peace for it.