“Parental Guidance is Advised”: The Shift Toward an R-Rated Culture 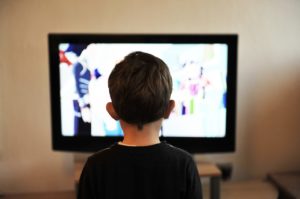 American culture has always been a battle between the wholesome and the obscene. For much of the country’s history, however, it has been easy to segregate the obscene and maintain safe spaces for ourselves and our families. Where once our prime time TV was furnished with shows like The Andy Griffith Show, and our theaters frequented by actors of class like Jimmy Stewart and Gregory Peck, our culture has, over the years, come to accept less family-friendly entertainment.

Our culture has had a steady shift towards accepting increased levels of explicit content in media, and it’s having an impact on how we behave. We need to be aware of the cultural shift if we are going to properly protect ourselves and our loved ones. To that end, we’ve put together a few statistics about how things have changed over the years.

The first swear word in a feature film was the word “damn” in 1939’s Gone With the Wind. That was the single curse in feature films of that year, nearly thirty years before an official movie rating system was in place. It wouldn’t be until nearly the ‘70s that the average swear word per film rose above ten. From there, it got worse quickly, however. By the ‘80s that average had tripled, and by 2003, the f-word was the most popular swear word. In 2013, The Wolf of Wall Street broke records with a shocking 798 swear words in its three-hour runtime. This steady upward progression has left us with PG-13 movies that can use the f-word, and even PG movies that openly use some of the more mild swear words. Quite the shift from the beginnings of movie curses in 1939.

Violence, likewise, has been on the rise in films, with nearly five times as many onscreen deaths in films in recent years as in years past. Likewise, gun violence in film has tripled since 1985, which should concern any parent whose children are negatively affected by violence in media. If current data is any indicator, those numbers can only be expected to rise.

Perhaps most dangerous is the level of sexual content in modern media. Over the past few decades, mainstream media, from movies to magazines, has increased its tolerance for explicit sexual content and objectification of women and men. It’s had an effect on viewers, with adolescent audiences seeking sex at younger ages, and with a higher number of casual partners because of it.

Sexual content is also addictive and can have drug-like effects on the brain, which is part of what makes it such a cultural hazard. While some suffering from an addiction to pornography and other sexual content may have been convinced that said content is acceptable and non-problematic, many others have realized they have a problem and are seeking a way out. If you’ve discovered a problem that you need help overcoming, LifeStar Therapy can help.

As society permits more and more obscene content to be presented to us, we need to take control of our media consumption and begin establishing rules for ourselves of what we will allow into our home, and what we will not. As always, we will have to be the first line of defense against the degrading and unwholesome content, available these days more than ever before.