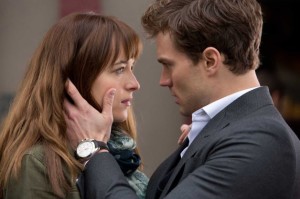 There has been a lot of buzz around Fifty Shades of Grey. With the release of the movie, it poses the question; why is the series so popular? The writing is mediocre, the author hits every cliché, and then there are the over the top sex scenes.

However, sex in books is not new, nor is the classic bad boy stereotype. But for centuries, books have been written about these abusive men–think of Heathcliff from Wuthering Heights–and the women they seek to dominate.

Like most relationships, not everything is black and white and there are various shades of grey. Many arguments have been made about why a person like Christian Grey deserves to be in jail. Perhaps he does, but there is a whole victim mentality (for both Christian and Ana) that is overlooked. Fifty Shades of Grey is a story about two people with low self-esteem and a lack of self-worth, who begin an unhealthy relationship with each other with unrealistic expectations.

So, what has happened to shape the characters into who they are?

The Fifty Shades of Christian Grey

So then, why does he turn back to his addictive lifestyle instead of dealing with the problem?

These questions are not here to justify or excuse Christian, but to hopefully make you pause a moment and understand there are factors that play into the reason people go down the unhealthy path of sexual/pornography addiction.

In the books, Ana is an educated young woman who falls quickly for the charms of Christian Grey. And with the growing female fan base, she isn’t the only one. What is surprising is how many women seem to want a man like Christian.

Throughout the series, Ana is filled with self-doubt and is always questioning if she is the right person for Christian. What if she can’t meet his needs? Ana is so wrapped up in Christian’s happiness, she never takes the time to find out what she really wants or needs. As the books progress, she gets better at finding her voice and is a little less concerned about Christian’s needs (spoiler alert — primarily because of her pregnancy).

In addition to her own insecurities, there are many unrealistic expectations placed on Ana throughout the books. There is an unspoken understanding that Ana is going into the relationship with Christian to “save” him. Because Fifty Shades of Grey is a hyper sexualized telling of Twilight (aka Beauty and the Beast), we expect a happy ending and we get it.

In the real world, the “happy ending” is an illusion. Many women in relationships with sex or pornography addicts find themselves in unending spiral of emotional numbness, shame, isolation, and a negative body image.

No matter if you are an addict or a spouse of one, sexual/pornography addiction hurts everyone. In Christian and Ana’s situation, they are able to heal and grow stronger throughout the series, but not every relationship can survive or recover from such betrayal and emotional baggage. For Christian, he finds the courage and the ability to heal from his childhood trauma through therapy and Ana’s support.

Like with any addiction, for addicts, it is important to remember that this is a disease and you must make a conscious decision every day to not partake in the lifestyle. Remind yourself why you no longer want to participate in unhealthy sexual behavior and set daily goals. Find a support group, a therapist, or someone you feel comfortable talking with who can help you. Take time to recognize what your triggers are that turn to repetitive, unhealthy sexual behavior or pornography use and find ways to replace your harmful sexual habits with others (such as volunteering, yoga, or taking a class). If you still cannot shake the habit, you may want to consider rehab.

For spouses, remember their addiction has nothing to do with you and everything to do with them. Although you can be supportive, it is not your responsibility to save them, and while they are going down their path of recovery, you need to take care of yourself. Find a hobby or group where you can get the support you need. In Fifty Shades, Ana has strengths, but having a support group, someone she could have confided in, would have helped her find her own self-worth.

Sexual addiction and pornography addiction are serious issues and contribute to the objectification of women. No matter how much Fifty Shades of Grey and Hollywood want to glamorize pornography and sex, the fact remains; there is nothing romantic about someone who wants to control and dominate another.